Coronavirus and its effect on Economy 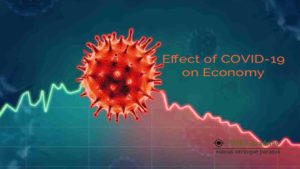 Since the COVID-19 outbreak was first diagnosed, it has spread to over 190 countries across the world. The global, novel virus has contained us in our homes and the lockdown is expected to carry on for months. The crisis on this scale will reorder the society in dramatic ways. The pandemic will have a noticeable impact on global economic growth.

Even though the full impact of the pandemic will not be known until the its effects peak, experts estimate that if the current conditions of lockdown persist, the global trade could fall between 13% to 32% resulting in trimming the global economic growth by as much as 2%. We take a look at how this pandemic may affect the global as well as Indian economy.

Since the virus was first diagnosed in Wuhan, China, it has spread across the globe in an accelerated rate. The World Health Organization (WHO) first declared COVID-19 as a health emergency in January 2020 and later on March 11, 2020 it was officially declared as pandemic. As on date over 2 million people are have been infected and over hundred thousand dead. Europe and USA are the worst affected countries at this point in time.

The global pandemic is affecting a broad swath of international economic and trade activities, from services generally to tourism and hospitality, medical supplies and other global value chains, consumer electronics, and financial markets to energy, transportation, food, and a range of social activities, to name a few. The health and economic crises could have a particularly negative impact on the economies of developing countries that are constrained by limited financial resources and where health systems could quickly become overloaded. Efforts to reduce social interaction to contain the spread of the virus are disrupting the daily lives of most of the people across the globe and adding to the economic costs.

According to the latest estimates by the Organization for Economic Cooperation and Development (OECD), the current containment measures could reduce global GDP by 2.0% per month, or an annualized rate of24%, approaching the level of economic decline not experienced since the Great Depression of the1930s.

Before the COVID-19 outbreak, the global economy was struggling to regain a broad-based recovery as a result of the lingering impact of growing trade protectionism, trade disputes among major trading partners, falling commodity and energy prices, and economic uncertainties in Europe over the impact of theUK withdrawal from the European Union. Individually, each of these issues presented a solvable challenge for the global economy. Collectively, however, the issues weakened the global economy and reduced the available policy flexibility of many national leaders, especially among the leading developed economies.

According to an April 8, 2020,forecast by the World Trade Organization, global trade volumes are projected to decline between 13% and32% in 2020 as a result of the economic impact of COVID-19. The forecast estimates indicate that all geographic regions will experience a double-digit drop in trade volumes, except for “other regions,” which consists of Africa, the Middle East, and the Commonwealth of Independent States. The forecast also projects those sectors with extensive value chains, such as automobile products and electronics, could experience the steepest declines. Although services are not included in the WTO forecast, this segment of the economy could experience the largest disruption as a consequence of restrictions on travel and transport and the closure of retail and hospitality establishments.

Experts, both global and domestic, are unanimous that the Covid-19 pandemic will be a huge economic effect on Indian economy. Even though the country may not slip into a recession, unlike the Eurozone, the US, or Asia-Pacific, the impact on India’s GDP growth will be significant. Moody’s Investors Service, on March 27, sharply slashed its projection for India’s GDP growth in calendar year 2020 from 5.3% to 2.5%.

India went into lockdown from March 24, 2020 for three weeks which was extended by another 20 days to May 4, 2020. The lockdown would severely impact the supply side of the economy, that is, production and distribution of goods and services. In an economy already reeling under a demand depression, rising unemployment, and lowering of industrial output and profits, all of which happening together for several quarters now, a supply-side constraint would deliver a big blow, jeopardising growth prospects and social and economic wellbeing of a large number of people.

Even the rural economy in India will be adversely affected because the pandemic has brought lockdown at the time of crop harvest. Absence of labour force and transportation problems will have serious implications on the agriculture sector of India which forms a large part of Indian economy.

On the brighter side some experts claim the Indian economy may fair better than other countries because India is less dependent on exports. According to them, India won’t suffer if globalization is put on reverse gear and new trade barriers are imposed. Plummeting crude oil prices will also help India to recover in short term. The extent of slowdown on Indian economy will depend on the government’s economic response to the crisis in the coming days.

While the level of economic effects will eventually become clearer, the response to the pandemic could have a significant and enduring impact on the way businesses organize their work forces, global supply chains, and how governments respond to a global health crisis.