India’s Space Mission; is it for welfare? 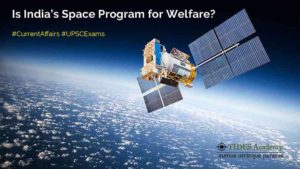 India’s Space program has made giant strides on world stage since its inception in late 1960s. From launching small rockets of just 30-70 kg payloads to carrying 4,000 kg payloads to the outer space, Indian Space Research Organisation (ISRO) has come a long way since its formation on August 15, 1969.

The journey which started humble & now after achievements like PSLV, GSLV, Cryo engines, MOM, Moon & now a moon lander has put India in the league of handful of countries who can boast of possessing such technology.

In the last decade the Indian space program leap frogged to break several world records and position India as a country with formidable space technology which is cutting edge as well as cheap. Some of these achievements include:

For any developing country the space program is important for two reasons; first, tangible benefits to society and its people. Second, these space programs often are tied to the country’s broader development objectives, including building a national science and technology base. India’s space program has contributed to the country’s economic growth, supported beneficial societal applications, and helped to build broader scientific and technical capacities  and  infrastructure.

India has not only used its space program to develop the country but the region. India launched a communication satellite in 2017 known as SAARC satellite for use of all members of South Asian Association for Regional Cooperation. The South Asia Satellite provides crucial information on tele-medicine, tele-education, banking and television broadcasting opportunities. It is also equipped with remote sensing state of the art technology which enables collection of real-time weather data and helps in observations of the geology of the South Asian nations.

Where the advancement in space and rocket technology has helped India strengthen its defence, India’s space program has primarily been driven for the development of the country and region.