What is Operation Meghdoot? 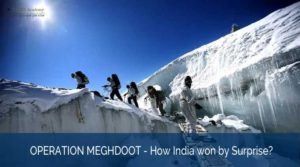 Operation Meghdoot was the code name given to the military operation carried out Indian Armed Forces to take control of Siachen Glacier in Kashmir Region. The operation was launched on April 13, 1984.

Siachen is 20,000 ft above sea level, in the icy Himalayas where temperatures are known to plunge up to 50 degrees below 0°C. It is located to the north of Ladakh and stretches about 2,600 sq km. It is considered world’s highest battleground. More soldiers are killed here because of the inhospitable terrain and weather than gun fire.

Genesis of Siachen Conflict between India and Pakistan

The origin of Siachin Conflict lies in the Pakistan’s claim over Kashmir after the partition of India in 1947. At the end of the UN-brokered ceasefire in 1949, India and Pakistan agreed on a ceasefire line (CFL) in undivided Kashmir as per the Karachi Agreement of 1949. The eastern most stretch of the ceasefire line was not demarcated beyond a point called NJ9842 since it was inhospitable and uninhabited. It simply said that from NJ9842, the line would run “thence North to the glaciers” — the Siachen glacier, the Rimo and the Baltoro.

After 1962 war, Pakistan began making certain cartographic changes to the ceasefire line by depicting the ceasefire line as extending from NJ9842 to a point just west of the Karakoram Pass, not northwards as the Karachi Agreement said. Pakistan, also, used this change in perception to start permitting foreign expeditions in the area of the Siachen glacier to reinforce its claim on the area.

In 1978, a German mountaineering map caused grave concern to Indian authorities, as the whole of the Siachen glacier and almost 4,000 sq km of territory around it was shown to be in Pakistan Occupied Kashmir. Colonel Narendra ‘Bull’ Kumar, one of India’s foremost mountaineers, expedition to Siachen in the summer of 1978 and recommended that to ensure the Pakistanis do not intrude into Siachen, India should establish a post in the area which could be manned during the summer. The Army Headquarters examined the proposal and felt that due to severe weather, inhospitable climatic conditions, and the high altitude, it would be impractical to establish a post in such a hostile environment.

In 1982, when Lt General Chibber was the northern army commander, he was shown a protest note from the Pakistan army, warning India to keep out of Siachen. It had become obvious to the Indian side that Pakistan army was getting ready to physically move into the Siachen glacier. India then decided to act swiftly in order to prevent Pakistan from occupying the Siachen glacier. The military action resulted in Indian troops gaining control of the entire Siachen Glacier.

The Indian Army planned an operation to control the glacier by 13 April 1984, to preempt the Pakistani Army. Operation Meghdoot was led by Lieutenant General Prem Nath Hoon. Brigadier Vijay Channa was tasked to occupy Saltro ridge.

Indian Air force air dropped the soldiers along with their provisions to the un-scaled peaks.  The first unit to establish position on the heights of the glacier was led by Major (later Lieutenant-Colonel) R. S. Sandhu. The next unit led by Captain Sanjay Kulkarni secured Bilafond La. The remaining forward deployment units then marched and climbed for four days under the command of Captain P. V. Yadav to secure the remaining heights of the Saltoro Ridge.

Paksitanis soon discovered that Indians had occupied the passes. An attempt was made to take control but was thwarted by Indian soldiers. The situation at Siachen has been at an impasse since. Both India and Pakistan maintain a permanent military presence on the glacier.

Timely action and surprise were two attributes which won Siachen for India.

Operation Meghdoot was a major victory for the Indian military even though some people viewed it as a futile capture of non-strategic land. However, others believe Siachen plays a key role in India’s forward defense. It “serves as a wedge” between Baltistan in Pakistan Occupied Kashmir and the Shaksgam Valley that Pakistan illegally ceded to China; India’s control of the glacier prevents China and Pakistan from “militarily linking up”.

Also, control of Saltoro gives India the “tactical advantage of dominating height.” Sitting at much lower altitudes, Pakistani soldiers are completely “shut off from a view of the Siachen Glacier” and are thus at a “severe tactical disadvantage”

Today, India controls the 70-km-long stretch of glacier, and reportedly spends about Rs 3 crore-Rs 5 crore on it daily. The amount goes towards the upkeep and health of the seven battalions stationed there. This adds up to about Rs 1,500 crore a year.