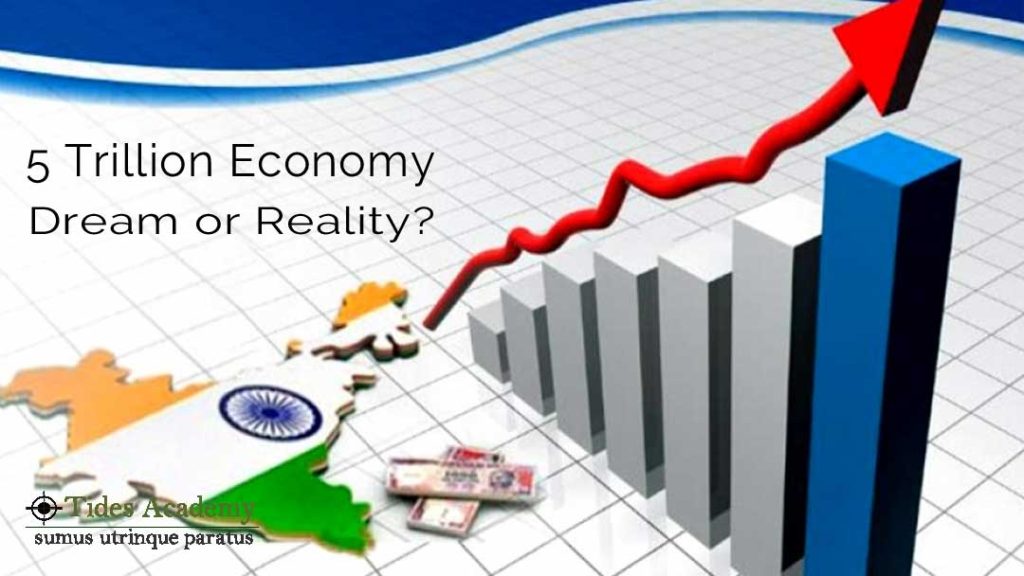 Soon after the Modi got elected for second term as Prime Minister of India, he announced an ambitious target of a $5 trillion economy for India by 2024. If achieved, India will become the third-largest economy in the world. The GDP of an economy is the total monetary (rupee) value of all goods and services produced in an economy within a year.

The Economic Survey 2019 presented by Chief Economic Adviser (CEA) Krishnamurthy Subramanian focusses on moving to a “virtuous cycle” of savings, investments and exports to transform India into a $5 trillion economy in the next five years. The focus is on boosting services sector contribution to $ 3 trillion, manufacturing to $ 1 trillion and Agriculture to $ 1 trillion.

However, the recent economic slowdown has made critics question the ambitious target. Also, in current context of Corona Virus outbreak which has induced virtual lockdown of the economy of the country, it becomes more important to discuss if this target is achievable.

To achieve a 5 trillion economy in half a decade, the average inflation rate every year has to be low, preferably less than 3% which is a global average. Also, the average exchange rate of a dollar in rupee must be below Rs.70.

India has a light dependency burden because 3 out of 5 people in India are in most productive age of 18 to 55 years. However, can India benefit out of this huge demographic dividend by providing good education and appropriate skills to produce a formidable work force, will determine if it can achieve its goal.

Since, urban centres occupy only 4% of earth mass but account for 81% of the global GDP today, urbanization has come to occupy centre piece in the quest for higher GDP growth, which again has to be sustainable yet rapid to be a long term development.

India’s share in global exports is merely 3%. Indian economy is domestic market driven (above 70% of the GDP) which has the good point of internal strength and protection from external economic shocks, but is limited by the fact that India, unlike China, misses the high price benefits of exports. Boost in exports will is a key to growing economy.

Less than 20% of Indian women work in the economy outside their homes, while the number is around 48% globally. This 30% gap is making India lose an estimated value of $700 billion of GDP which itself can drag the current GDP higher by 25%.

For GDP revamp and growth, agrarian economy of India is still a major domain to look at with 58% of the population being involved in agriculture directly or indirectly, a large part of them being impoverished landless agricultural labourers. The sector needs a quick revamp of technology, better organized markets, contract farming at a large scale, and a more robust roads infrastructure.

To achieve 5 trillion GDP by 2025, we need a GDP growth-rate per year to the tune of 11.5%, whereas we are now at 4.7% in the last quarter. Government has taken steps in this direction is also indisputable. The incumbent government had taken landmark steps in its previous stint such as the implementation of demonetization, the goods and services tax as well as the insolvency and bankruptcy code towards building a healthy, robust and transparent ecosystem. Government also will need to take into account the effect of increasing Non Performing Assests (NPAs) on the economy.

Government of India rightly abolished 1300 obsolete laws, and we have gone 65 positions up in the ease of doing business index. But still 115 districts are extremely backward on the 49 crucial indicators of education, health, skills, nutrition, etc. Without lifting them up, India cannot go among the first 30 nations on this parameter, only then can India gets into the developed nations club. Yet, much more is needed to realise the dream. Real reforms are needed.

There is also the need for rapid digitization to achieve 5 trillion economy at an early date. Digitization will enhance speed, transparency, and decrease delays and corruption in all business transactions.

The COVID-19 pandemic is having a “severe” effect on the world economy and is expected to cause a -3% change (i.e., a contraction) in global output in 2020. According to WEO India’s growth is expected to dip to 1.9% in 2020 and rebound to 7.4% in 2021 which is still a positive outlook since all major economies are projected to be in recession during this period.

So, one thing is clear that the economy will surely touch 5 trillion, but when no one can be sure about.